What exactly is the harshad mehta scam?

Let's say we have three banks A, B and C. And a broker X. And obviously, the government.

Now the banks want to make as much profit as they can by using the money just the way they want. And the government wants to regulate them by making it compulsory for them to invest some of the money in Government bonds. So the government puts a simple rule that at the end of every day, A,B and C have to show them a balance sheet and a minimum amount has to be invested in bonds.

The banks do it for some time but they ask the government for some kind of relaxation. So a new rule comes where you need to show the balance sheet only on Fridays. The average amount per day in the bonds has to be over the fixed amount, however, there is no such limit on the daily amount now.

Now X comes into the scenario. Since A would sell some bonds to invest elsewhere and B may buy some bonds as well, the banks will now have different amounts of money invested in bonds everyday and some will have less while some will have more. But all of them need to have that minimum amount on Friday, so the banks with lesser amounts, i.e, A in this case, would need to buy the bonds to keep up with the average.

So what does A do? It contacts X to get it some bonds from either B or C.

X is a trusted broker and all the banks know him pretty well. So X tells A that he'll get the bonds but right now he isn't sure that from whom will the bonds come, B or C. So instead of making the cheque on the bank's name, A should sign the cheque for X. (Which was illegal, BTW).

So A does that. Now X goes to B and ask for the bonds and using the power of trust, X tells B that he'll pay the money the next day to which B agrees because he also offered a good return on the money. See, bonds are important, money may come later too.

Using this trick, X makes sure he always has some money with him.

Now comes part two. The money he had, he invested heavily in the stock market to create a turmoil, specifically for a few companies like ACC. The market saw a huge run like never before and share prices of ACC and some others went over the tops.

Once he knew the market was at a peak, he started profit making and markets crashed. The bank people who were involved with him in the illegal acts panicked and one of them even committed suicide. 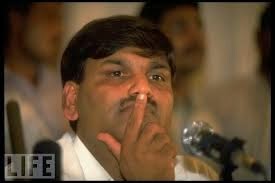