Taxation in the United States

Posted by Unknown on 05:29 in General Knowledge on Taxation Income tax US Taxation | Comments : 0

The United States of America is a federal republic with autonomous state and local governments. Taxes are imposed in the United States at each of these levels. These include taxes on income, payroll, property, sales, capital gains, dividends, imports, estates and gifts, as well as various fees. In 2010 taxes collected by federal, state and municipal governments amounted to 24.8% of GDP. In the OECD, only Chile and Mexico taxed less as a share of GDP. The United States also has one of the most progressive tax systems in the industrialized world. 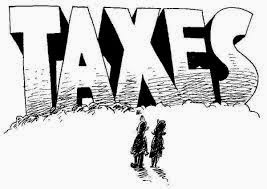 Taxes are imposed on net income of individuals and corporations by the federal, most state, and some local governments. Citizens and residents are taxed on worldwide income and allowed a credit for foreign taxes. Income subject to tax is determined under tax accounting rules, not financial
accounting principles, and includes almost all income from whatever source. Most business expenses reduce taxable income, though limits apply to a few expenses. Individuals are permitted to reduce taxable income by personal allowances and certain nonbusiness expenses, including home mortgage interest, state and local taxes, charitable contributions, and medical and certain other expenses incurred above certain percentages of income. State rules for determining taxable income often differ from federal rules. Federal tax rates vary from 10% to 39.6% of taxable income. State and local tax rates vary widely by jurisdiction, from 0% to 13.30% of income, and many are graduated. State taxes are generally treated as a deductible expense for federal tax computation. In 2013, the top marginal income tax rate for a high-income California resident would be 52.9%.


The United States is one of two countries in the world that taxes its nonresident citizens on worldwide income, in the same manner and rates as residents; the other is Eritrea. The Court upheld the constitutionality of the payment of such tax in the case of Cook v. Tait, 265 U.S. 47 (1924).
Payroll taxes are imposed by the federal and all state governments. These include Social Security and Medicare taxes imposed on both employers and employees, at a combined rate of 15.3% (13.3% for 2011 and 2012). Social Security tax applies only to the first $106,800 of wages in 2009 through 2011. However, benefits are only accrued on the first $106,800 of wages. Employers must withhold income taxes on wages. An unemployment tax and certain other levies apply to employers.

Property taxes are imposed by most local governments and many special purpose authorities based on the fair market value of property. School and other authorities are often separately governed, and impose separate taxes. Property tax is generally imposed only on realty, though some jurisdictions tax some forms of business property. Property tax rules and rates vary widely with annual median rates ranging from 0.2% to 1.9% of a property's value depending on the state.

Sales taxes are imposed by most states and some localities on the price at retail sale of many goods and some services. Sales tax rates vary widely among jurisdictions, from 0% to 16%, and may vary within a jurisdiction based on the particular goods or services taxed. Sales tax is collected by the seller at the time of sale, or remitted as use tax by buyers of taxable items who did not pay sales tax.
The United States imposes tariffs or customs duties on the import of many types of goods from many jurisdictions. These tariffs or duties must be paid before the goods can be legally imported. Rates of duty vary from 0% to more than 20%, based on the particular goods and country of origin.
Estate and gift taxes are imposed by the federal and some state governments on the transfer of property inheritance, by will, or by life time donation. Similar to federal income taxes, federal estate and gift taxes are imposed on worldwide property of citizens and residents and allow a credit for foreign taxes.