I was kept on kicking by the police and my friends were trying to save me form the same. I was thrashed by the police and my specs went off to the floor and I was blind for few minutes. Someone kicked on my chest and went to the floor groaning with paining. when I was a child I saw mamata Bannerjee to protest in the same way and we learnt from her. But what happened today? The below video shows the footage of the same.  My mistake was that my parent taught me to raise voice against corruption/against anything which is wrong for the society. Where I did wrong by raising my voice? We were protesting for rights of women being deprived and being ignored by the system and in result we got pains. Lights were switched off so that no one can see the barbaric act being deployed on the students so that media and the social world never come to know the truth.Remember Today it happened with us but tomorrow its will be your turn.

Well it’s not about Jadavpur University it’s about the rights and the fight against negligence of justice. After the incident on 17th September Mr.Partha Chattopadhya and Commissioner of Police said that there were some outsiders based on which the rapid action war type of protocol and action was taken. Well yesterday on 20th September 2014 and in the last two days in Delhi, Mumbai and Today in Bangalore mass protest have been made against this barbaric action. Now obviously Delhi Mumbai,Bangalore are outside of JU campus and students so what will be course of action. We are all outsiders so are we all Terrorist and Goons. Are well against of the Development of West Bengal.The education minister  did not bothered to talk with the JU students and over above asked these students to leave JU and join some other college. Well if we all leave the state would be easier for the ministers to vote themselves again in 2016 election. If we all leave West Bengal then he have to invite his political GOONS  players to come and work for an Singapore Based company established in West Bengal.

IF THEIR WERE ANY OUTSIDE STUDENT PRESENT IN JU CAMPUS ON THAT DAY OF 17TH SEPTEMBER THEN WHY DID NOT THE POLICE FILED ANY CASE AND ARRESTED OUTSIDERS.

THE MASS STUDENTS AND MASS PEOPLE PROTEST ACROSS INDIA  FROM DELHI TO BANGALORE TO MUMBAI  REVEALS THAT UNEDUCATED BARBARIC ACTIVITY WILL NOT BE TOLERATED.WE MAY NOT BE JU STUDENTS BUT WE ARE HUMANS.ENOUGH WE HAVE TOLERATED,JUSTICE IS THE DEMAND.

Now the picture very clearly portrays that we are not Maosit. We are all well educated, well established citizens of India standing by the side of JU students.
We are not making this matter to be painted with political color. It’s about justice, it’s about protest against crime and injustice. We are forgetting that this new government was voted due to mass protest against the 34 years crime in West Bengal. Then when we are raising voice against the series of rape cases, Autorick shaw problems and many students dies in the last 3 years due to political games. Remember if you are reader and if tomorrow anything happens to your family and you raise voice then you will be tagged with various names which the government will prove that your anti-to the current government.  The point is that if we don’t protest and raise our voices and we remain timid then be ready for the next assault with your child and when you will seek justice you will behaved in the same manner way it happened in JU.
We are against the crime and criminals and not against the society. 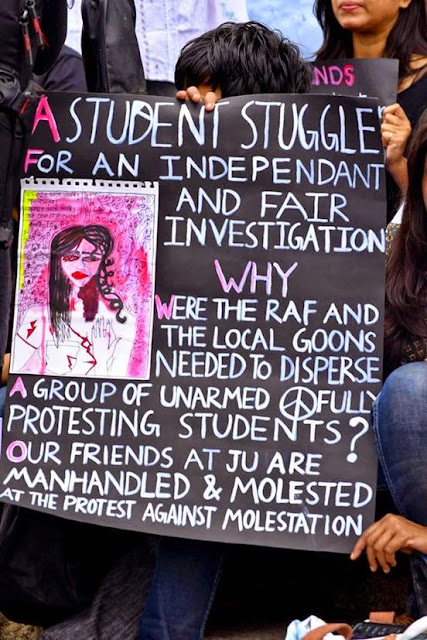