Posted by Unknown on 11:12 in global economy Indian economy | Comments : 0

We are taught from childhood that not to go for tax evasion but yes we are also told that file less tax by using various strategies but we were not told that how to manipulate valuations and get illegal licenses. I am not the first neither I am the last to write to about this topic but the point of discussion is where we are living and how long we will bear the pains and others will smile.

Loss of Rs 1.86 lakh cr or may be more than that taking the compounding value of the same amount being invested in PPF. I have tried my best to give many thoughts and questions for my readers to think. In my next article I will come up where Costing and Cost Accountants can be helpful, but before that you need to know where and what will be benefits of the helpfulness to the society and economy.

Playing with natural resources are easy as common man are busy in earnings their life-hoods and for the Big cats its game of making themselves in the list of billionaires in the top magazine covers. Big cats have made billions out of millions and even despite of penalties and other imposition its going to affect the common man as production will get halt and jobs will be at stake.Further playing with these subjects are complicated to understand for the common man in the initial days and hence its becomes easy to fool the common man.

The fallacy of the above numbers is that when we discuss and read in media and GDP is going to double and the economic boom is around the corner-for a common man its means
His salary will grow by hopping margin,
New Job Opportunities
Buying one more Dream House or Car
Foreign Tours and
Better life style

And within all these the biggest game of corruption and mal practices are being played and will be played in the future. The latest verdict of the Supreme Court will create problems for the current government of BJP as when they are trying hard to get the economy and business in right track the problem of the natural resources management comes to be gridlock. The cancellation of the allocation of 214 coal blocks and their auction in future will shore up the government’s revenues and enable it to keep its fiscal deficit under control. But this will cost the Economy and more the common man as inflation will shoot and prices will rise as the coal is one of the key raw materials in every manufacturing particularly to the infrastructure segment.

Electricity and Power cost will rise for the common man and will have to take measures to cut down on monthly budgets. On the other side the production cost are going to increase which leads to inflation.

The escalation cost of infrastructure will increase and this will impact the prices of ancillary products in the long term. Fiscal Deficit will come down but the real benefit of the same will hardly pass to the end consumer.

On the other hand Banks NPA assets will gallop like a horse as many companies have taken loan based on the coal blocks they bought at cheap prices. Raghuram Rajan will have some hard days coming ahead in the near future.  He might have to spend couple of nights sleepless since during 2012 the Government of Congress asked the banks to reshuffle the state power companies books of rising loans and penalties and now the  court had said coal block allocations between 1993 and 2010 had flouted norms, adding the 12 ultra mega power projects for which coal blocks were allocated through competitive bidding could mine coal from these blocks, but only for power projects these were meant for.According to a report by Karvy, as of June this year, the banking sector had exposure of Rs 5 lakh crore (8.8 per cent of non-food credit) to the power sector, against 4.3 per cent in March 2008.

I hope you must remember that when the GDP growth of 8% was being dreamt during that time the Indian financial market and economy was flooded with power projects and IPO’s.  All these will now cost to the RBI through the Supreme Court Verdict.

Another factor which will increase is now the supply of ‘Cheap Coal’ from the overseas market which will increase the import bill of India. Now every company is not in the condition to bear the extra cost of allocation under the new auction. Cash strap condition is prevailing everywhere hence cost cutting and other sources of supply will be explored. This will further pressure of the foreign exchange and currency in the long term. Hence much depends on the BJP government and the type of valuation and price derivation strategy is being developed and adopted.

Its no longer important that who will be penalized and who will get into jail or any other custody. The matter and the problem form here is far bigger for the economic as well as for the common man. Even if arrest and warrants and cases are being run the biggest question at this point of time who India and BJP faces the battle. 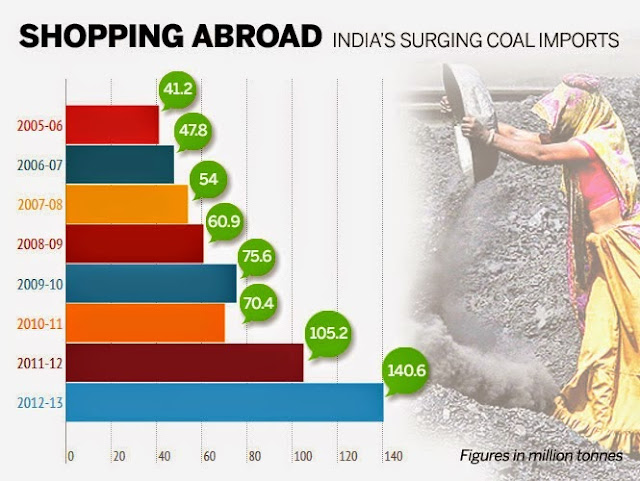