Posted by Unknown on 12:48 in General Knowledge on Taxation Income tax | Comments : 0 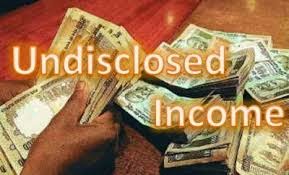 Undisclosed income to the tune of Rs. 90,000 crore was detected during 2013-14 in various searches and surveys conducted by the Income Tax Department, a top official from the Central Board of Direct Taxes (CBDT) said in Hyderabad on Friday. Speaking to reporters, CBDT Chairman K V Chowdary also said the net income tax collection during the first four months stood at over Rs.1.51 lakh crore after accounting refunds of nearly Rs. 54,000 crore. "The I-T Department has conducted surveys in as many as 5,327 cases all over the country during last year and an amount of Rs.90,000 crore of undisclosed income was detected," the official said in a press conference. He said the department was in the process of implementing various data warehouse and various Business Intelligence projects which will enable identification of new tax payers and also deepen the tax base. According to him, the number of taxpayers in India stood at 3.5 crore, of which, around 2.97 crore people were filing their returns electronically. During the current fiscal year, about 1.51 crore of returns have been 'e-filed' showing an increase of 13 per cent compared to last year. "The national budget for the current financial year 2014-15 is fixed at Rs. 7.36 lakh crore which is more than 15 per cent of the last year's collection. The net collections as on date are Rs. 1, 51,154 crore after accounting for refunds of Rs. 53,936 crore," Mr Chowdary said. He said they are confident of achieving the fiscal target by promoting voluntary compliance. Mr Chowdary said the department has so far identified 22 lakh people who were supposed to file income tax returns but failed to do so. He said that about three lakh appeals in taxation matters were pending in various courts and forums in the country, prompting the department to increase the manpower to deal with this backlog.