Posted by Unknown on 13:26 in General Knowledge on Taxation | Comments : 0 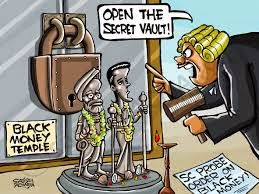 In another instance of suspected black money stashed by Indians abroad, investigative agencies are probing a set of 600 new names and identities which have been provided to India by a "source" during the last financial year.

The information of these suspect accounts were obtained by the Central Economic Intelligence Bureau (CEIB), a crucial department under the Union finance ministry, during the just concluded fiscal through a multi-layered sequence of information exchange on tax related issues and as part of the mandate to unearth black money hidden abroad by Indians.

The CEIB, according to an official note accessed by PTI, has "disseminated" the data of these 600 cases to the income tax department, Enforcement Directorate (ED), Financial Intelligence Unit and the Directorate of Revenue Intelligence for further investigation under their respective laws which check tax evasion, money laundering and violations of the foreign exchange Act.