Posted by Unknown on 13:29 in General Knowledge on Taxation Income tax | Comments : 0 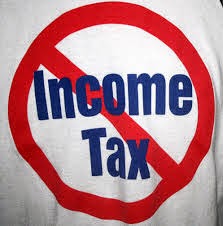 At a time when the entire nation is worried about inflation, Lok Sabha MP and BJP spokesman Subramanian Swamy, said here in the city, to relieve people of the burden, income tax should be abolished. To compensate, Swamy said the country could be run on black money, which he would retrieve in two weeks, if he was made the finance minister. When TOI asked the MP how? Swamy did not have much to say.
Swamy who was invited to speak on Indian Economy — past, present and future at PSG Institute of Management on Sunday, time and again mentioned his interest in becoming finance minister.Swamy kept pointing out corrective steps to revive economy by carefully suffixing "If I am made the finance minister," after every opinion.When a member of the audience asked Swamy about the possibilities of him becoming finance minsister, Swamy said, "They will not make me one now. Only when the government is in crisis, they will remember Swamy."In his hour-long speech, Subramanian Swamy first boasted about India's economic status in the past. "Until 1100BC, we were one of the developed countries. Gradually all our resources were eroded by different foreign invasions," Swamy said.He then pointed out developments since Independence, when the country's economy revived after the crisis it faced in agriculture in the 60's through green revolution. He also spoke about the economic growth during Narasimha Rao government in 1991."We would have been in a better position if we were allowed to take up locomotive in the early 19{+t}{+h} century. The British did not allow us to start railways until 1857," said Swamy. SOn economic growth during Swamy spoke on former Prime MinisterManmohan Singh's role in it. During Singh's term as finance minister tenure in the Narasimha Rao governmentand chief economic adviser between 1972 and 76, Swamy said, he said "Singh only obeyed whatever was told to him. He is a good listener. In Sanskrit lion is called "Singh" and Manmohan is "Circus Singh" (circus lion)."To improve economic status in India, Swamy said, "To bring relief to common man, immediate measures have to be taken. And, I feel we should first abolish income tax during this period of inflation. India's lost 1.76 lakh crore in 2G scam, 1.86 lakh crore in coalgate scam. There is about 120 lakh crore of black money in foreign banks. With this money we could survive for the next 60 years without collecting income tax," he said.The Janata Party founder also said that among several indirect taxes collected in the country, only 22 contribute to a major section of government revenue . "We should remove all other indirect taxes levied on commodities that do not contribute to the economy significantly," the economist said. The MP said that sand mining happening in the coastal regions of Tamil Nadu and Kerala is because of the Indian Sand being rich in Thorium, the substitute for uranium in nuclear power plants. "The entire world is looking for thorium. We should focus on generating power from it and use it to improve the economy," Swamy said.He also briefly mentioned about agriculture's contribution in the economic growth. On one hand when agriculture has almost 60% of the country's population employed, the potential of the field remains underutilized, the 74-year-old MP said. "We should provide power guarantee to farmers as it is done in Gujarat. The farmers there get 18 hours of uninterrupted power supply without subsidy," Swamy said. He said, on one hand farmers paid less than what industrialists paid for continuous power supply, and on the other hand, the government gained on its economy with improvement in agricultural yield and loss born in subsidies," Swamy said.